Another example of conflicting casualty information but this one is plain weird as the two pieces of information are wildly different. Norman Lewis Hawkyard served as Trooper 26371 Commander-in-Chief’s Bodygaurd (he had previous service with the Cape Mounted Rifles, discharged “worthless character” and as a Corporal Herschel Native Police).

The South African Field Force casualty roll shows he died of disease at Charlestown, Natal on May 6th, 1901. The Times (surname spelt Hawkeyard) confirms this adding that he succumbed to enteric fever. The medal roll and the nominal roll (WO127) show very clearly that he was killed in action at Aliwal North, Cape Colony on May 6th, 1901. Which is correct? The two locations are a seven hour drive apart, so the location and cause really are in conflict.

To resolve this we have one other source to consult: In Memoriam (Steve Watt, University of Natal, 2000). This is a marvellous reference work showing the burial location of thousands of Anglo-Boer War fatalities. The entry for Hawkyard show he is buried in Newcastle, Natal just 45 minutes away from Charlestown. With this evidence it is more likely Hawkyard died in Natal rather than the Cape Colony, and he succumbed to disease. There was no fighting in this part of Natal in May 1901 (or in Aliwal North for that matter). Where does the killed in action information come from? It is impossible to tell. 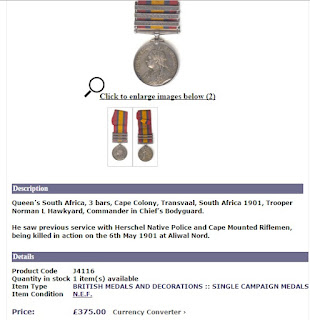 Hawkyard’s QSA medal is currently for sale with LiverpoolMedals, who may have acquired it from eBay where it was offered for sale in December 2015. Worryingly Liverpool Medals choose to state that Hawkyard was killed in action and ignore the died of disease stated in the casualty roll. I did write to them with this information, which they have ignored. The premium for a killed in action is higher than that for a died of disease.