A lad from Wrecsam and Queen Victoria's Diamond Jubilee

The rather laboriously titled "Wrexham and Denbighshire Advertiser and Cheshire Shropshire and North Wales Register" carried a short article on his death (17-03-1900). It noted that he was 6' 3" tall, "proportionately "big", he looked a veritable giant". Perhaps unwisely Walter had previously written home saying the Boers couldn't shoot.

In June 1897 Walter, as a Welshman, he was from Wrecsam, had been chosen as one of four troopers of the 2nd Life Guards to represent each country of the United Kingdom to head Queen Victoria's Diamond Jubilee Procession.


There is plenty of film of the procession and I found a shot of an officer and four Life Guards preceeding a party from the Royal Navy. This matches the order of the head of the procession as published in the papers. I wonder if Walter is furthest from the camera, that Trooper looks the biggest. 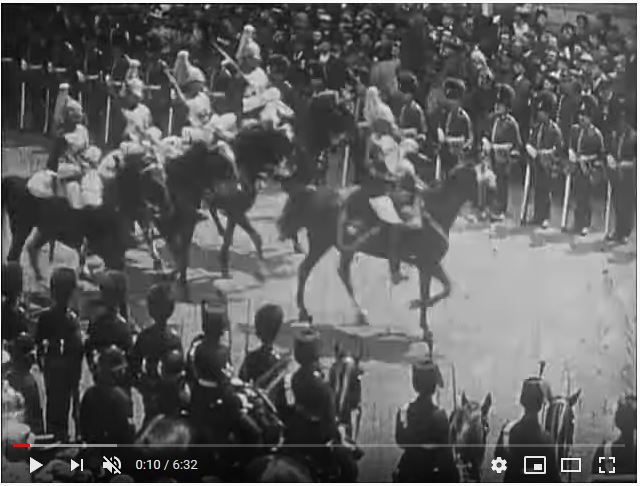 The officer is Cpt OH Ames, 2nd Life Guards, at 6'8" he was the tallest officer in the Army. I have no idea who the other three troopers are, they don't appear to be listed in the Jubilee Medal rolls - perhaps they did not receive the Jubilee medal?

Cpt Ames did not serve in the war. The Household Cavalry (1st & 2nd Life Guards and Royal Horse Guards) only sent a composite squadron. Again Walter was hand picked for service.

The YouTube film is https://www.youtube.com/watch?v=HxohzRe9D6w
Posted by meurig at 16:23 No comments:

The Jameson Raid is a remarkable event even in the turbulent history of southern African land grabs by Africans, Boers and Britons. 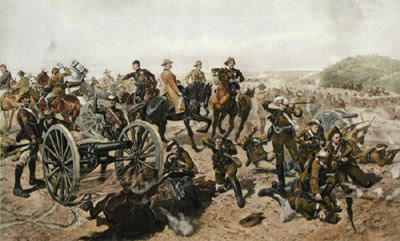 What sets the raid apart is that it was not a state operation, but a private army - mercenaries - of the British South Africa Company run by the diamond magnate Cecil Rhodes.

There is much information on the Raid on the net and particularly www.angloboerwar.com. You can get a nominal list on the "Name Search" putting "List of Jameson raiders" (no quotes) in the Notes field. A more accessible list is available here.

This post presents a list of 67 known Raiders who went on to serve in the Anglo-Boer War. There will be more as research continues. If you can add to this list please leave a comment - thanks.

The Register is a large database with many types of data that can be interrogated in ways not yet done to provide new and unique views of the British Empire in the Anglo-Boer War.

The Queen's South Africa (QSA) medal could be issued with zero to 26 clasps in a variety of combinations. These combinations are of great interest to many medal collectors.

The number of clasps on a QSA is one collecting facet. As I build a new QSA medal roll index, the table below shows the numbers of clasps issued on the QSA drawn from the current 124,948 QSA clasp entitlement on The Register. As more data is added these numbers will change. 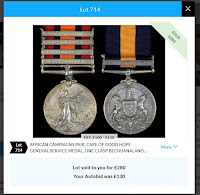 When received it was discovered that on the obverse of each medal there was a large blob of solder on Queen Victoria's face. Additional solder was on the post of the QSA suspender, the rods used to attach the clasps to each other had been removed. Solder had been roughly applied to the rivets to prevent the clasps falling apart. There are obvious drops of solder on the top of the clasp ears on the Cape of Good Hope medal.

The auction house was advised by e-mail on February 1st asking how the "very important defects on each medal" were missed. The response was that the medals could not be accepted back and I could have requested further photographs. 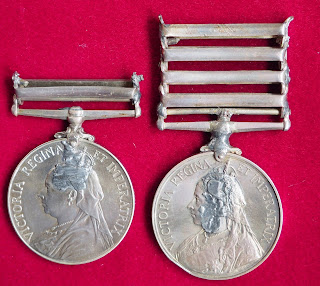 Further email communication failed to draw Mellors & Kirk on the question whether the cataloguing of this lot represented the standard of cataloguing or this was a simple mistake.

A Signed For letter was sent to Mellors & Kirk restating the case and questions regarding Mellors and Kirk's standard of cataloguing.

This letter drew an offer of a refund of hammer price plus premium, which has been accepted and promptly processed.

It took 24 days, numerous emails and a Signed For letter to bring this case to a suitable conclusion.

Throughout Mellors & Kirk refuse to explain how these clear and obvious defects were not stated in the catalogue description.


"In conclusion, I think it for the best that Mellors & Kirk Ltd does not accept bids from you in the future."