For the first physical convention since the Pandemic I was pleased to present an exhibit using more data compiled from The Register.

"Odd Men" focuses on officers and soldiers from the regular British cavalry who served in the war but not with their parent regiment. Very often they earned different clasps making those medals prized by collectors. I analysed the clasp entitlements for the regiments, those that deployed and those that didn't to produce a spreadsheet allowing "odd men" to be easily spotted. 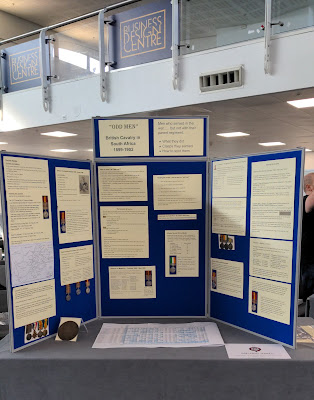 The pdf of the panels in the display is here.

The "Odd Men" Identifier - a spreadsheet of regiments, clasp entitlements and more is here. 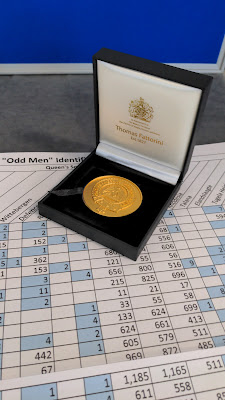 There is just one name on the page: Eachus, Thomas Eedis.

The X-ray was a very recent discovery made by Conrad Rontgen in 1895. He immediately realised the X-ray could be useful in medicine. From 1896 medical doctors and scientists began developing the X-ray for doctors to use.

During the war both sides used x-ray machines. There are many hits on-line for "x-ray in the boer war", you can see a picture of an xX-ray machine in use here. Professor JC de Villiers wrote an overview article "The origins and early use of radiology in South Africa" which can be downloaded. However, TE Eachus' name does not figure in these sources or on-line searches connected with the war.

There is indeed a Thomas Eedis Eachus (1878-1931) who was not a doctor but an electrical engineer and I believe is the "X Ray Expert" although no direct evidence has been found to substantiate this. Known as Eedis, he was born in Sydenham, Kent in 1878, his father George Eedes was a civil engineer. Eedes was just 21 when war broke out in 1899. I have not traced his education, the last census before the war in 1891 he is a 13 year old scholar living in Forest Hill, south London. He does not appear to have gained any professional qualifications, nonetheless appears to have been a very competent and successful electrical engineer.

Eedis sailed for the war on 10 March, 1900 aboard SS Avoca with 10 General Hospital, he is described again as "X-ray Expert". He was perhaps working for a company that supplied X-ray machines and was sent out to maintain the machine. He worked in the Cape Colony, Orange Free State and Transvaal. The QSA roll is signed at 9 General Hospital, Bloemfontein in September, 1901. Eedis stayed on into 1902 as he earned a King's South Africa medal, his rank on this roll is "X-ray expert". How wonderful if that was inscribed on the medal.

Back in the UK, in December 1903 at the Enfield Church Day Schools Grand Bazaar he gave a "most attractive as well as instructive" presentation on the use of X-ray "in surgical operations, especially in relation to bullet wounds received in war"; something of which he had first hand knowledge. In 1905 he was granted a patent with a George Howard Nash for  "Improvements in Cut-outs for Overhead Electrical Conductors." to make overhead trolley wires safer when they break. Eedes enjoyed sports, he played cricket for Enfield and was a member of the Bush Hill Park Golf Club, Winchmore Hill, London.

By 1911 Eedis is living in St Albans, Hertfordshire working for the Western Power Company. He later worked for the North Metropolitan Electric Power Supply Company.

In February 1917 Eedes was commissioned Temporary Lieutenant in the Royal Naval Reserve for his electrical skills. In April 1918 he was put to work on hydrophone research and development. Again Eedes was working on new technology, the hydrophone had only been invented in 1914. Once more he was successful in his work and was awarded an OBE in 1919 for "carrying out pioneer work in connection in which his electrical knowledge was invaluable". His report in ADM-337/123/244 noted: "Possess tact and firmness. Has greatly helped development of the Special Trawler Flotillas attached to Southern Patrol Force."

In 1929 be became a Joint Managing Director of the newly formed Young Accumulator Company Ltd. The 1935 AGM reported success of the company's "Super Armoured Battery" for use in electric vehicles, the report noted the batteries could be re-charged overnight; sound familiar?

In June 1918 Eedes married Nancy Lilias Bayford, they had one son, George T Eachus who was killed serving in the Royal Navy in 1943.

Medals "returned as protest, not wanted"

In December 1936 a veteran of the Anglo-Boer War and World War 1 returned his medals to the War Office. The reason is not recorded and one can hazard a guess why a veteran would return his DCM (WW1), QSA, KSA and 1914-15 Star trio in December 1936.
The veteran was James Galoska (or Gasloska), Sergeant 4125 2nd bn Somerset Light Infantry, later RQMS 20218 6th bn Somerset LI.
Born 1875 St Pancras, London, son of Charles and Christina Galoska. His father was Prussian and worked as a commission agent. His mother was from Orkney. He enlisted 08-06-1894 at Devonport, a member of the Devon Artillery Militia. After 12 years exemplary service James was discharged 07-06-1906 at Exeter, intending to live in Toronto Canada at 119 Wellington Street West, Toronto, where his mother and sister lived.
AT some stage he returned to the UK and in 1914 enlisted again. He went to France in 1915. In 1917 he was awarded the DCM, "For conspicuous gallantry and devotion to duty. He has performed consistent good work throughout and has at all times set a splendid example."
Demobilised 08-03-1920 in Germany to serve with the Inter-Allied Rhineland High Commission. On 14-12-1936 the War Office recorded the return of the medals "in protest". They were scrapped on 01-09-1942. The object of the protest is unknown.

Note on the KSA roll WO100-323p148. Crown Copyright, The National Archives, London.
James appears to have worked as a clerk for Lloyd's Bank, King's Cross Branch, London. He died in London in 1955.
Posted by meurig at 21:27 No comments: