Connie, Mrs Kruger: The Story of a Nurse

I first met Connie in 1990, introduced by her nephew the Rev John P Lloyd. The Rev Lloyd had answered a request I had made for information about families in the Anglo-Boer War, I think. Through him I go to know about Connie, her older sister Marion (born Mary Ann), two brothers and a cousin who served in the war. Passing on letters and photographs about the Welsh Hospital where Connie and Marion worked I headed to West Wales and the Llyfrgell Genedlaethol Cymru in Aberystwyth – that’s the National Library of Wales. I spent a delightful day going through the papers of the Welsh Hospital and a splendid photo album. This research resulted in two articles published in Soldiers of the Queen (Victorian Military Society) in 1991, the Lloyd Family at War and a history of the Welsh Hospital. Not imagining there would be more, I put the Rev Lloyd’s correspondence and my notes in the cupboard.

Unexpectedly Connie re-appeared in 2007 with a man called Jonathan Collins, I was slow off the mark and she quickly departed for a life in Australia. I was gutted. To console me I had recently become friends with one of her colleagues from the hospital, Lt & QM George Manship RAMC, who was mentioned in despatches for his work with the Welsh Hospital. In contact with her Australian owner I was promised first refusal. Patiently I waited and waited, then in December 2020 the call came – Connie was available. Quicker than you can say “arafwch nawr” (slow down!) Connie was on the plane back to the UK.

Safely home I began to get to know Connie better, reviewed the Rev Lloyd’s correspondence, and she has revealed herself to be more interesting than I could imagine. From my original research I knew she came from a large family in West Wales, she had trained as a nurse and volunteered to serve in the Welsh Hospital. A patient, or at least a frequent visitor, was a man named Kruger, a “nephew” (later described as a “relative) of President Kruger, Oom Paul himself. Connie would marry Mr Kruger, it was detail I paid little attention to 30 years ago.

Connie (Edith Constance) was born 28th, August 1875 at Llandygwydd, Cardigan, West Wales. Her parents John and Rachel owned a 250 acre farm called Penalltybie, which exists today. Connie was the eighth of ten children, eight lived into adulthood. The family were well off, Connie was educated at the Welsh Girls School in Ashford, Middlesex. Initially the Welsh Charity School founded in 1716 in Clerkenwell, London and moved to Ashford in 1856, becoming all girls in 1883. The school shut in 2009 becoming a boys school. After school she trained to be a nurse at Bristol General Hospital. On 16th, March 1900 she joined the Princess Christian's Army Nursing Service Reserve, number 430. This may have been prompted by her joining the Welsh Hospital which was formed in March 1900.

The Welsh Hospital was privately funded, the medal roll lists 44 staff. As it would work closely with the RAMC the commander was a soldier, Major JW Cockerill, RAMC. They left England on 14th April and arrived in Cape Town on 3rd May. They immediately entrained for Bloemfontein then in the grip of the typhoid epidemic claiming tens of lives every day. By 18th June three members of the hospital had died. Connie and Marion’s brother Trpr 9303 AP (Percy) Lloyd IY died in Bloemfontein on 3rd July. They were at his bedside; “We have spent a very, very sad and miserable day today” Marion wrote home. The hospital moved briefly to Springfontein then back to Bloemfontein before moving again to Pretoria where it was attached to No 2 General Hospital. On 30th September 1900 the Welsh Hospital was handed over to the RAMC to become an Officer’s Hospital. The Hospital was very highly regarded, 1,127 patients were treated in five months, only 10 died and no amputations were performed. In addition to MIDs, a CB, CMG were awarded and Marion was awarded the Royal Red Cross. Most of the staff returned home in October, Marion stayed on as Matron of the Officer’s Hospital and Connie stayed on too moving to 5 General Hospital, Cape Town. Death still stalked the Welsh Hospital staff, the founder, Professor Alfred Hughes, died shortly after his return.

In November 1901 Marion wrote to her sister Cis (Margaret); “Who do you think is a patient of mine now, but Capt Kruger, oh Cis, the more I see of that man, the more objectionable he is to me, & of course, seeing so much of nice refined men, his lack of good breeding gets on my nerves most terribly”. Why Marion thought to be so frank about a patient was that her younger sister, Connie, was rather fond of “Capt Kruger”; “she writes to Mr K now, is sending him a photo”, but worse, “she never told him she was engaged”. Apparently Connie was engaged to “Charlie” and Marion was outraged; “I consider Connie a most vain, conceited, & selfish little flirt”. Marion said she would write to “Charlie”, that must have been some letter. Connie’s romance with “Capt Kruger” would develop into a serious relationship. Tragically though Marion would know none of it, she died of enteric on 17th December, 1901, the fifth member of the Welsh Hospital to die. Presumably Connie attended her funeral as she had done for her brother Percy in Bloemfontein. 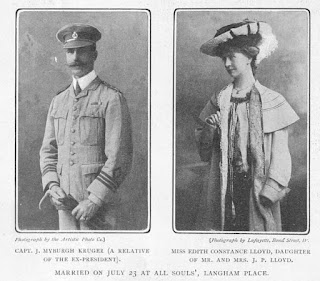 “Capt Kruger” was Jacobus Myburgh Kruger, an officer in the British Empire forces, first with the Imperial Yeomanry Scouts, Provisional Transvaal Constabulary then with C Division South African Constabulary, sometime attached to Military Headquarters, Pretoria. Lt Kruger was captured at Rhenoster Camp on 7th June, 1900, and subsequently released. Jacobus was born in Fort Beaufort, Cape Colony in 1871. The connection to Oom Paul is not immediately obvious.

Connie earned a KSA and presumably returned to the UK after the end of the war. In 1903 Jacobus travelled to the UK and on July 23rd they got married in London at All Souls’ Church, Langham Place, her brother the Rev John (Jack) E Lloyd co-officiated the service. The reception was held at the Langham Hotel, one of London’s best hotels to this day. Their wedding made the social newspaper The Sketch under the title “A Notable Wedding”. The honeymoon was spent in Europe, did they visit Oom Paul in exile in Europe? They returned to Africa to settle in Swaziland where Lt Kruger must have been stationed with the SAC. We next hear of Connie and Lt Kruger in Johannesburg in August 1906 where he dies on the 15th. Unfortunately no cause of death is recorded, they did not have any children.

Connie returned to England in 1909 and became involved to some degree in the social and political affairs of the day. On the 1911 census she is a visitor at The Nurses’ Lodge, Colosseum Terrace, Regents Park, a home for “temporarily disengaged” nurses. She is described as a “nurse & suffragist”. Very interestingly all the professional women but not the domestic staff have their occupation appended with “suffragist” or “suffragette”. The Suffragette Campaign was reaching its height, in 1912 militant and violent tactics were employed and in 1913 Emily Davison famously threw herself in front of the King’s horse at Epsom and died. I have not found any evidence Connie was no more than a supporter of the Suffragette cause.

In February 1914 she re-married. Her second husband was Lewis Patrick (known as “Pat”) Cauvin, a trained telegraphist working his way up the ranks of the Eastern Telegraph Company – the leading telegraph company in the world that literally connected the British Empire. Neither Connie nor Lewis appear to have served in WW1, they may have been in South Africa. They had a son, Lewis Patrick Trevelyan (known as “Paddy”), born in 1915.

After WW1 they appear on various shipping lists returning to the UK, they lived in Eastbourne through the 1920s and into the 1930s. In 1937 tragically Connie’s second husband died at Farnborough, he was only 53 years old. In 1939 Connie was living in Orpington, Kent. Her son had joined the Colonial Service and was in Malaya, with the outbreak of war he joined the Intelligence Corps. He was present at the fall of Singapore and escaped to join the Chinese communists fighting in the jungle He died of a fever on the 12th July, 1944 near Kambou, Johore and is commemorated at Kranji Cemetery, Singapore. The last letter he wrote was handed to his cousin Dr JF Lloyd-Williamson after the war by a British Army sergeant who had been with Paddy.

Sadly our next reference to Connie is her own death in February 1953 at the age of 77 at Boscombe, Bournemouth. She had lived a very full life through some momentous times and must have had a tale to tell.

I am always indebted to the Rev JP Lloyd for making family papers available which have provided so much super detail.