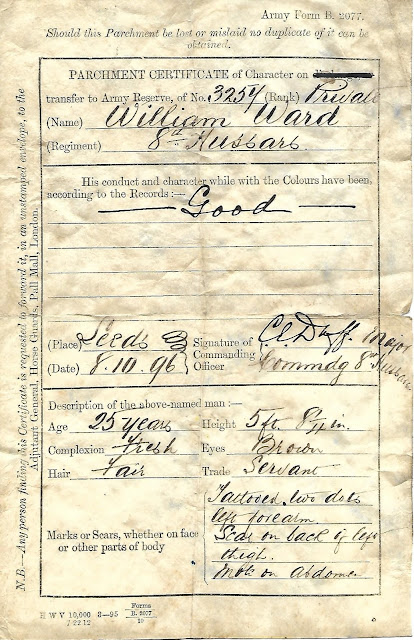 This is a parchment certificate issued to each soldier on discharge from the Army or on transfer to the Reserves. The parchment was a form of identity and could be used to show employers proof identity, character and why they had not been civilian employ. These are not common at all.

This certificate was issued to William Ward who had served with the 8th Hussars and was discharged at Leeds on 8th October 1896 to the Reserves. While on the Reserves Ward was liable for call up for the period remaining of his 12 year enlistment.

Ward's service papers exist on FindmyPast. They show he was born in Banbury, Oxfordshire and enlisted age 18 in 1889, he was a servant.

He was recalled for active service in the Anglo-Boer War on 28th December, 1899. He served twice in South Africa, probably being invalided due to illness. He earned the QSA with clasps, Cape Colony, Orange Free State and King's South Africa with two date clasps. He was finally discharged in August 1902.