Thomas Bracken, a soldier in the midst of history

Thomas Bracken was born in Kilcock, County Kildare, Ireland, and was baptised in May 1878. In November 1896 he enlisted for the militia, 3rd bn Dublin Fusiliers, at Naas, he was an 18 year old labourer. Eighteen days later he joined the regular Army at Naas, enlisting for the Dublin Fusiliers number 5931.

In 1898 he was sent to South Africa to join the 2nd battalion at Pietermaritzburg, Natal. In September 1899 the Dublins were part of a small force, under the command of Major-General Sir W Penn-Symons, sent to Dundee in northern Natal to counter any Boer invasion. At the first pitched battle of the war on 20th October, 1899 at Talana the Dublins were in the van storming the hill. The battle was not a great success for the British, the infantry were subject to heavy artillery and rifle fire as they advanced and stormed the hill. Additionally they were enfiladed, casualties were high. With true British infantry grit bayonets were fixed and the hill carried. As the Boers fled northwards the 18th Hussars and Mounted Infantry set off in pursuit splitting into two, a portion of the regiment became stranded on a farm and forced to surrender. Despite winning the battlefield the British were forced to retreat to Ladysmith to avoid being caught by the invading Boers.

Thomas is not listed in the published casualty rolls (Natal Field Force and Palmer’s) but is shown in the regimental history as missing since 20th October, 1899 at Talana. Quite how he came to be captured is not clear, the wounded were left behind with medical personnel. Was Thomas wounded and left behind (there is no evidence), was he captured on the battlefield? This seems most likely, which means he would have part of the Mounted Infantry captured at Talana. Very few of the MI captured at Talana are recorded in the official casualty rolls, yet I have found many in The Times lists of released POWS. Bracken is shown in The Times as being released 6th June 1900 at Waterval. His clasp entitlement on the QSA of Orange Free State, Transvaal and Talana is typical of a POW. Those Dublins who survived Talana would be eligible for the Relief of Ladysmith and Tugela Heights clasps. A handful of the 2nd bn remained in Ladysmith during the siege. Following his release in June 1900, Thomas rejoined the 2nd bn. In January 1902 he was transferred to the 1st battalion in South Africa. The 2nd bn headed for Aden, Thomas was probably transferred as he was eligible for transfer to the Reserves after six years Colour service and would be heading towards the UK.

In November 1902 the 1st battalion left South Africa for Malta. Thomas was stationed here for eight years. In 1903 Thomas transferred to the Military Foot Police, number 762 and was immediately advanced to Lance-Corporal. He married a Maltese lady, Evelyn Sultana, in May 1905 at Sliema Parish Church. Thomas, with his wife and two sons, arrived in Southampton in November 1910, a third son was born at Aldershot in October 1911. They moved to Dublin in 1913, Thomas passed his second class Certificate of Education at Portobello Barracks and shortly after was promoted to Corporal.

The outbreak of WWI did not impact Thomas like many other soldiers, he did not serve overseas and remaining in Dublin. Thomas was awarded his LSGC in April 1915, appointed acting-Sergeant with pay in November. A fourth child, a daughter, was born in January 1916 in Dublin. At this time Bracken had transferred to the Military Foot Police based at Ship Street Barracks, Dublin.

On April 22, 1916 he was sent to Military Detention Barracks to collect a prisoner, one Sir Roger Casement. Casement was a former British diplomat, who during the Anglo-Boer War was British Consul in Lourenco Marques - a hot bed of spies and intrigue. Casement was at the heart of British efforts to disrupt supplies to the Boer Republics and gain information. After the war he had turned to Irish Nationalism and was involved in supplying arms to the nationalists. During WW1 he tried to get the Germans to support an armed uprising, in April 1916 a German submarine put him ashore, but he was soon captured and taken to Dublin. Bracken's job was to escort Casement to London which he did via Holyhead. Arriving at Euston Station on the 23rd Bracken handed his prisoner over to the Metropolitan Police. Casement was tried in June, convicted of treason and sentenced to death, Bracken giving evidence. Casement was hanged on August 3, 1916 at Pentonville prison. There is a splendid picture of Bracken and his fellow police colleagues called to give evidence: https://irishconstabulary.com/sir-roger-casement-t1387.html#.WKo6FYVOK70.

Advancement to Sergeant came in 1918, Thomas was discharged in 1920 after 24 years’ service his address was 19 D Block, Iveagh Buildings, Patrick Street, Dublin. He was awarded a pension with an extra sum for 30% disablement due to myalgia. What happens to Thomas after the war is not clear, in 1919 his wife, who could not sign her name, applied to be repatriated to Malta. This appears to have been unsuccessful. One son has been traced, Thomas George Bracken, who died in 1997 in Roanoke, Virginia after a long career with the US Army. His obituary states he grew up in Dublin and joined the US Army in England in 1941.

At some stage after 1949 Thomas (senior) was awarded a Meritorious Service Medal. Amongst his service papers is a letter from the War Office dated 1920 referring to an application made for an MSM with annuity for Thomas, the letter states that his “name has been placed on the register..the list is a long one..only the few strongest claims can be eventually rewarded”. It took at least 29 years for the award to be made. 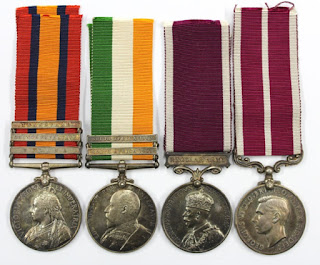 Bracken's medals are interesting, they all come in “modern” boxes of issue with handwritten labels except for the MSM which is typed and stamped. The QSA and KSA have swivel suspenders and are impressed in small capitals of the post WW1 era. They are not marked as replacements. The LSGC is not one would expect to be issued in 1915 but one from 1930 onwards – crowned bust and coronation robes, with the fixed bar “Regular Army”. The MSM dates from 1949, coinage profile “FID DEF. All medals are in mint condition. There are, unfortunately, no remarks on the QSA and KSA rolls or in his service papers regarding the issue of any of these medals. 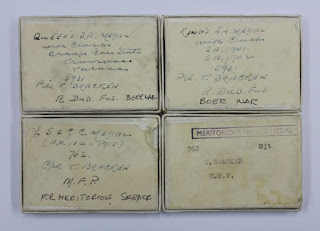 Thanks to members of the British Medal Forum for their help. Bracken's picture is taken from an image on The Royal Irish Constabulary Forum.