Saved from death by a prayer book - but who?

I recently purchased this postcard because it shows a book and prayer book carried in the "left breast pocket of a Corporal of the R.S.G.....which was the means of saving his life when shot at Greonfontein [sic], Bowkers Spruit, on Dec. 30th, 1901." 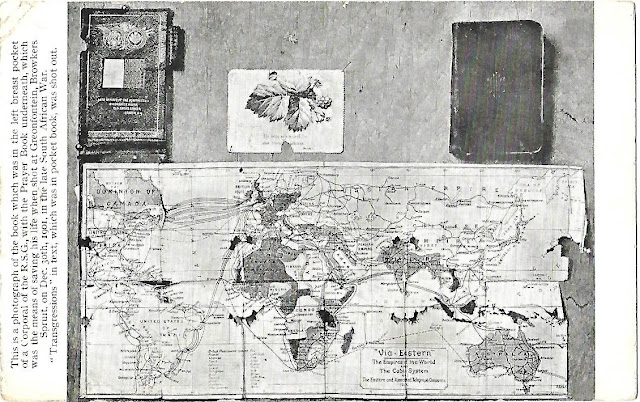 Who was this soldier?

In the action at Goenfontein 5 men of the 2nd Dragoons (Royal Scots Greys) were killed and 13 wounded. No other units suffered casualties, it is possible only the 2nd Dragoons were involved.

Amongst the wounded were a Corporal and a Saddler Corporal. Cpl 4726 WG Griffiths, his service papers survive and record he was wounded in the abdomen. Service papers have not been found for Saddler Cpl 3922 R Scott. However, using the newspaper archive on FindmyPast, a casualty list indicating where each man was wounded was found in the Yorkshire Post and Leeds Intelligencer (4th January 1902).

The newspaper confirms the book and prayer book beloinged to Saddler Corporal Scott, he was wounded in the chest:

I have no record of Saddler Corporal Scott's medal on the market.

For all the men wounded I have added the location of their wound in The Register.
Posted by meurig at 13:46