The QSA named to a cruise ship: HMS Ophir

In June 1901 HMS Ophir took the Duke and Duchess of Cornwall and York (the future King George V and Queen Mary) on a tour of the Empire. Their route included South Africa - the war was still raging.


The ship named 'HMS Ophir' was a civilian ship of the Orient Steam Navigation Company. It only received the prefix 'His Majesty's Ship' for the duration of the Royal tour. One of the functions carried out by the Royals was the presentation of QSA medals to Australian and New Zealand recipients. These, known as "Ophir presentation medals", were issued unnamed and engraved locally, thus they have a different and distinctive naming style to other QSAs.


To supplement the civilian crew 53 Royal Navy officers and men were seconded to the ship. Most of the sailors had served during the war, so they were correctly entitled to a Queen's South Africa medal.

The curiosity is that a number of these men received QSAs named to 'HMS Ophir', a ship that never served in a war-like capacity during the war. 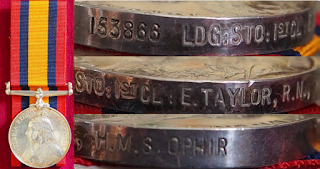 From the table below it will be seen that only seven of the 53 of the HMS Ophir QSAs are known, and only three are named to HMS Ophir.


The tour received much press coverage. At least two accounts were published: 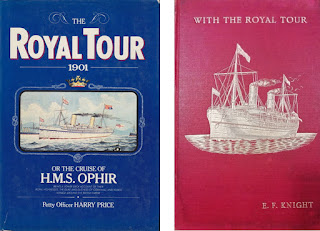 HMS Ophir was escorted by two Royal Navy Ships HMS Juno (7 QSA medals) and HMS St George (12 QSA medals). None of these medals are known to be extant.