Nesbitt's Horse casualties and the Siege of Philippolis, October 1900 - who was who?

The problem: a section of the South African Field Force Casualty Roll (JB Hayward & Sons 1982) showing Nesbitt's Horse casualties for the siege of Philippolis. There are no service numbers for the troopers.

Looking at the medal roll for Nesbitt's Horse there are many men of the same surname, two men naned Schwartz and six men named Scott; how do you separate them out? 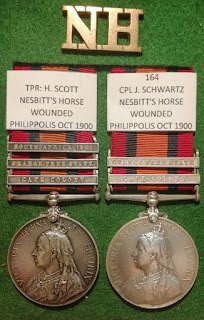 164 CPL J. SCHWARTZ. NESBITT'S HORSE
Trooper Swartz (sic) is listed as wounded at Philippolis during the siege in 1900. There are two men with the name of Schwartz on Nesbitt's Horse roll. As my man had an Orange Free State clasp, whilst the other only had a Cape Colony clasp, my logic being as the action was in the Orange Free State anyone at Philippolis would qualify, but there was always an air of uncertainty.

After detailing all the data from various sources, I saw on a DNW auction a QSA, which I brought at a reasonable amount, in the hope of proving he was the "J Scott" wounded during the siege.
TPR H. SCOTT NESBITT'S HORSE
I knew that two men with that surname were on the casualty lists but there are 6 Scott's on the medal rolls. As he was the only one to have an Orange Free State clasp and from D Squadron it had to be him. 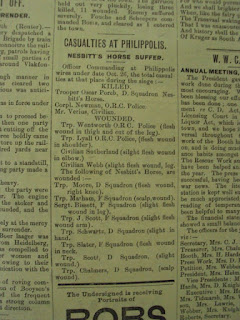 I found a newspaper report from the Grahamstown Journal which listed the casualties in detail, and importantly listed the Squadron they were with, this clinched and confirmed that:- All the Nesbitt Horse participants came from D and F Squadron and all qualified for the Orange Free State clasp.

I created a Excel spreadsheet and listed all the data I had from various sources to identify these men:

Another newspaper report from a member of the detachment from Norvalspont was found, this report mentioned Lieut Hanna, Nesbitt's Horse, as leading the men to Philippolis. A report from a relative of Tpr W.G. Hill mentions how Tpr O. Porch [Pooch in SAFF] was killed :


"Trooper George Water Hill, Number ??? Who fibbed his age to join Nesbitts Horse in Grahams Town, (he lived in Salem at the time) He was one of the 34 Nesbitt Horse under Lieut Hannah, who galloped to Phillipolis to relieve the siege. He ended up on Tomkin's Kopje for a few days. While the shooting went on, one shot went very close to his head, as he turned to say to his mate next to him, "that was close", the bullet had hit his mate straight between the eyes. His mate was Oscar Porch, whose grave is a few hundred metres away in the Phillipolis grave yard. Granddad recounted that he never looked over the rocks again."

From all this data, Lt Hanna, Tpr O Porch and Tpr W.G. Hill were all unique names and this clarified the section of the roll that the squadrons were listed. It was clear to see that D Squadron (Roll signed at Colesburg 13 June 1902, and referenced by the Squadron OC as being D Squadron)  and F Squadron (Roll signed at Norvalspont 4 August 1901) were involved, and as the medal roll is separated into sections and squadrons I was able to say for sure which one of the 5 Scott's and which one of the 2 Schwartz's were my men.

Interestingly, the medal to Trooper H. Dunn was sold as being a casualty, but there are two men with this surname on the roll. One was not even in Nesbitt's Horse at the time and neither was in D or F Squadrons and only qualified for a Cape Colony and SA1901 clasps. Also there is no mention of Dunn in any of the casualty reports. The SAFF list is not 100% and verification is always advised.


Queens South Africa Medal 1899-1902 two clasps, Cape Colony, South Africa 1901 (Tpr H. DUNN. NESBITT’S H.) With copy medal roll. Trooper Dunn was wounded at Philippolis on 1st November 1900. A town in the Orange Free State, 45km west of Springfontein. The town and district provided burghers for a Commando for the Orange Free State forces. The town personally surrendered by the landdrost on 21st March 1900 to Lt-Gen Sir W.F. Gatacre who had ridden over with a small escort from Springfontein Junction. On 18th October 1900 some 200 burghers under Cmdt G.J. Scheepers attacked the town. The resident magistrate H. Gostling, with 11 police and some hastily recruited 30 men for the town guard, held off attemps to overwhelm them until they were relieved on 24th October by a detachment of Imperial Yeomanry. In December 1900, the garrison was withdrawn. Price: 225.00


Following Jonathan's lead I have looked at the casualties reported in SAFF for the Siege of Philippolis, the dates range from 23rd October (Trpr Porch), "November" to 16th November (Philoppolis Town Guard). We know from The Gazetteer in The Register that the siege of Philoppolis was from 18-24 October, note the Grahamstown Journal cited above gives a casulty report dated 26th October. The initial force besieged comprised the Town Guard, Orange River Colony Police and some volunteers, some are included in the Grahamstown Journal list. Nesbitt's Horse joined the besieged garrison on 21st October. A releif force of 49 men from various cavalry regiments arrived outside the town on the 22nd but were forced to surrender that night. A second relief force of Imperial Yeomanry arrived on the 24th. The dates given in SAFF for the siege are wrong, except perhaps for Trpr Porch's death.

I have made corrections in The Register for all the Philippolis casualties, and from newspaper reports added Agent CH Tonkin who was present at the real siege - "A Newlyn Man" (Cornishman 29-11-1900). His wife was there as well.