Who Was There? The Siege of Wepener April 1900

The troops involved were from the Colonial Division with a small number of British regulars. The siege actually occurred a few miles west of the town in a specially chosen site bordering the Jammersberg Drift on the Caledon River. Wepener is in the Orange Free State, so this clasp is cannot be awarded with the Orange Free State clasp.

The clasp is sought after for the action it represents and the fact it was the second smallest issue of a clasp behind Relief of Mafeking. However, that does not make it rare in the market, medals with the clasps are frequently traded. The clasp also appears incorrectly on medals so it is essential to verify the entitlement before paying the premium this clasp attracts.

In November 2012 I completed a new Wepener roll published on The Register. This was the first digital roll ever published. A hardcopy roll was created by Stanley M Kaplan of Johannesburg which he privately printed undated. The Acknowledgements reads like a "Who's Who" in the history of QSA research; MG Hibbard, DR Forsyth and Diana Birch. The roll was assembled before the internet and databases existed for the masses. The approach was to read the medal roll for each unit known to be involved and pick out the entitled men, then follow leads from history books and sales catalogues for 'odd men'. Because the vast majority of clasps were awarded to men in colonial units creating the roll was more difficult. Very many colonials served in more than one unit and some medals correctly carrying the Wepener clasp are named to units that did not serve in Wepener. It can get confusing trying to cross reference medal rolls. Many served in units both of which were present at Wepener, such as 1st & 2nd Brabant's Horse. This raises the question; "With which unit did they serve at Wepener?", to resolve this you need access to the casualty rolls, enlistment dates in attestation papers (WO126 The National Archives) and discharge books (WO127 The National Archives). The Register has resolved a number of these discrepancies.

In 2012 I had the advantage of computers and of course Kaplan's roll, which unwittingly contains some duplicates, I have removed these from the figures presented here for his roll.

The figures presented below represent updated knowledge on the Wepener clasp.

There is no evidence the Royal Army Medical Corps had any representatives at Wepener. Where HMG got this information is not known. Interestingly Hibbard states 6 men of the Cape Medical Staff Corps were awarded the Wepener clasp. Kaplan lists one but he is on the strength of Brabant's Horse.

From the table you will notice the number of other units represented from officers and men attached, and others who served in units prior to transferring to a unit that served at Wepener. This means you may find medals named to units not present at Wepener, many are genuine, but some are bogus and need checking carefully. There are also medals named to units that men served in after Wepener, the South African Light Horse are an example, see here.

Trying to resolve entitlement through Ancestry is not easy as you are completely reliant on the skill of their indexing, which is not great, and having to create and follow a trail from one unit to another. The Register removes this by presenting one record per man with all their units shown as well as clasp entitlement, and other infromation such as awards, casualty and perhaps service in other wars.

Clasps that "got away"

The table below shows units known to have Wepener clasps issued incorrectly and not re-claimed, some are shown on the roll as eligible but why is not clear. Some of these are known on the market.

The "odd men" are simply that, the medal roll indicates entitlement to the clasp but, why needs to be investigated. The Relief Force medals are more straight forward - simple clerical error.

Eighteen sailors from HMS Doris were incorrectly allocated the Wepener clasp, 17 were re-claimed, one made it to the market and sold for £2800 in 2007. See Barrett J. Carr’s related article published in the O.M.R.S. Journal (Summer 1977). 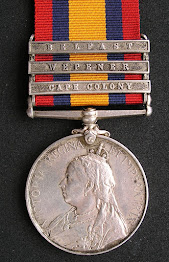 awarded to Pte 2675 A Swales, 10th Hussars. He was servant to Mjr-Genl JP Brabazon who was in command on the IY in South Africa and commanded the relief force. Brabazon's entitlement to Wepener was cancelled and his clasp re-claimed. Somehow Swales' clasp was not reclaimed. His medal was considerably cheaper than the HMS Doris medal.

MG Hibbard in his great paper, "The Single Bar" (Cape Town 1964) cites four examples of a QSA with the the single clasp Wepener, all have proved to be multi-clasp entitlements and not all entitled to Wepener anyway.

Casualties during the siege

The Register has logged 551 sales of 303 Wepener clasp medals, The "survival rate" is 15%. This statistic shows they are well traded, this year alone eleven have been recorded for sale. As The Register logs more sales data these numbers will rise. This includes medals named to a unit served in subsequent to the siege.