In the late Victorian era the "followers" in a military campaign were awarded medals, but in bronze not silver as a cost saving exercise. These men performed non-military menial duties such grass cutting (for forage), ward sweepers, transport drivers, water carriers and so on.  Most commonly seen is the India General Service medal 1854-1895 in bronze for the campaigns of the 1890s covered by clasps such as Punjab Frontier 1897-98, Relief of Chitral 1895 and Tirah 1897-98.

Collectors may see on the market a silver QSA named to an Indian in typical flowing script but on the medal roll it is clearly marked they were issued with a bronze medal. Is this a piece of fakery or not?

After the war in 1903 the Indian government decided to allow attested followers (except ward sweepers) silver medals. Un-attested and authorised followers ("private followers") were still awarded bronze medals.  This change of policy had its roots in the Anglo-Boer War, in May 1902 the Indian government allowed men to exchange their bronze medals for silver ones at their own expense when they enlisted as soldier. The date 1903 is critical as many medals to Indian followers had not yet been issued, therefore technically the new rules could apply to QSAs even though the campaign pre-dated the rule change. Whether this happened is not actually clear.

Here is an example of a silver QSA to an Indian who should have bronze QSA: 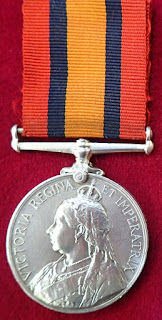 The medal roll was prepared in Cape Town in September 1901, four men, all (Indian) Veterinary Assistants were to receive silver medals with clasps, these were issued in December 1904. For Pat Ram and the remainder it is clearly shown they were to be issued bronze medals without clasps (unlike the issue of the bronze IGS). These medals were sent to India for distribution, no date is shown.

One can assume then that Pat Ram received a bronze medal without clasps. So, how did his silver QSA come about? Under the 1903 rules it would appear he enlisted as a regular soldier and purchased a silver QSA.

However, the naming is an issue. The great collector and researcher into QSAs and KSAs to Indians, David Grant, has only seen verified exchange medals with impressed naming not engraved. David surmises that Ram's medal with engraved naming might then be a replacement medal, issued after 1903 according to the rules then in force. The Mint in Calcutta did not issue a replacement bronze medal. A number of blank silver QSAs were sent to India, an impressing machine was not sent until 1908. There is clearly more research to be done in this area.

If Ram had been issued clasps they would have been Transvaal, Defence of Ladysmith and Laing's Nek. However, he wasn't and his QSA (bronze or silver) without clasps illustrates the joy of collecting QSAs; the hidden facts that come with a bit of research.

David Grant has published on this topic in the journal of the OMRS and online on the Anglo-Boer War forum, see: