A Russian Fighting For The Boer Cause 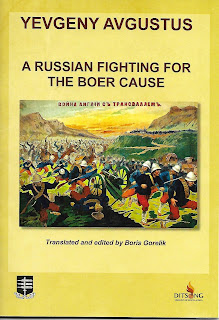 This booklet is the first translation into English of part of the memoirs of Russian Army officer Lieutenant Yvengeny Avgustus. He traveled to South Africa in early 1900. Choosing the Natal front Avgustus relates with clarity his impressions of the Boer army, its leaders, burghers and other volunteers. Seeking action his group joined the Krugersdorp Commando shunning foreign volunteer groups riven with dissent.

As part of the Krugersdorp Commando Avgustus fought at Spion Kop - the battle was as hard and terrifying for the Boers as the British and Tugela Heights in February. Three days in a trench subject to artillery, machine gun and rifle fire he marvels at the tenacity of the British infantry, advancing into Boer machine gun fire to close with the bayonet; a weapon the Boers didn't possess and feared. With the British troops upon them Avgustus and a comrade managed to escape leaving many dead and wounded behind.

This well written, and well translated tale, ends with Avgustus negotiating the crush of fleeing Boers at Elandslaagte station heading north for safety. There is much of interest in this slim volume and is a good read.