“was lost and is found” The Military Story of GTW Webb 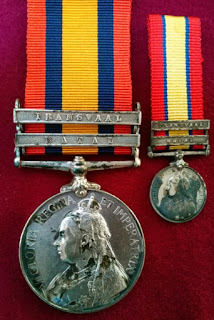 This research was inspired by Research puzzles - "Odd" casualties from war memorials.

George Theodosius Wynne Webb was born 2 March, 1876 in Woolwich (or Charlton) Kent to Capt (retd) John H and Edith G Webb. Cpt JH Webb had served in the 11th Foot and was a Higher Division Clerk in the Admiralty. The family was comfortably off, they had one or two servants recorded in the census. George, one of three sons, was educated at Merchant Taylors School. His two brothers Andrew Henry and William Vere Brandram were commissioned into the RGA. In September 1894, aged 18, George was commissioned into the Royal Marine Light Infantry. His career came to an end just 10 months later in July 1895 when he resigned his commission. His record in ADM196 darkly notes that “confidential reports whilst studying at RN College” were written. Obviously George was in trouble while studying at the Royal Naval College, Greenwich.

Determined on a military career George gets a commission in the Royal Jersey Militia RA as a route to getting a commission in the regular army. In October 1897 George secures a commission in the RGA. However, on the 12 July 1899 he leaves the Army, he did not resign or was court martialled. Records at the RA Library simply record he left, obviously by agreement and no doubt to save himself and his family from any shame for whatever transgressions occurred. There is no record in the London Gazette I can find. Having failed twice to embark on a military career George did what many troubled young men did and went overseas. George sailed to southern Africa where war clouds were gathering.

George ended up in Ladysmith by October 1899 where he unexpectedly pops up in the Digest of Service for the 10th mountain battery RGA. The 10th mountain battery were stationed in Natal before the war and formed part of Sir George White’s force defending Ladysmith. The Digest records that “Mr Webb (attached)” was among the officers captured at Nicholson’s Nek, "Mournful Monday", 30 October. A hand written marginal note adds “Mr Webb was a civilian”. This ties in with the record from The Times for “Sec Lieut GTW Webb” being released as prisoner of war. Whether George deliberately went to Natal to find former officer comrades is not known. But, he obviously knew the officers of the 10th mountain battery well enough to be allowed to accompany them on their attack. Whether he had a role beyond observer is not known. Like his previous military careers this one, albeit as a civilian, ended quickly and badly; George found himself in the officer’s prison camp in Pretoria for seven months.

On release from POW camp George “Left battery on occupation of Pretoria” as recorded on the medal roll. I cannot help think that in the enthusiasm for the first battles against “mere farmers”, George’s participation was evidence that some British officers did not take the war seriously. By June 1900, officers knew they were in a serious fight and there was no place for civilian hangers-on. Perhaps put off by his experiences George appears to get a job with the customs office in Utrecht, eastern Transvaal (National Archives of South Africa). How long he stuck at this is not known, but the lure of a soldier’s life was too strong. On 9 May, 1901 he enlists as Trooper 3783 Steinaecker’s Horse, claiming 5 ½ years’ service in the Royal Artillery. It is very unlikely he saw any active service as his fourth attempt at a military career came to an end just 20 days later. George died of pneumonia in Fort Napier, Pietermaritzburg and lies in the St George’s Garrison Church cemetery with a fine marble cross over his grave “Erected by his Sorrowing Parents”. The epitaph they chose is, I think, emblematic of a troubled soul, “was lost and is found”; from the Parable of the Prodigal Son.

George Webb’s QSA is correctly engraved to “Lieut. G.T. Wynne-Webb R.G.A.”, the surname an unfortunate error. His name as “Webb, GT Wynne” is found on the roll for the 10th mountain battery (WO100/146p66) appended in a different hand at the bottom of the list of Lieutenants, he has no rank. The medal with two clasps (Transvaal and Natal) was issued 9 April, 1902 with a note to correspondence “93883/19”. What it would be to find that correspondence, undoubtedly his parents and/or brothers petitioned the War Office for a medal engraved as an officer, which of course he was not entitled to. George appears on an Extra Clasp roll for Steinaecker’s Horse (WO100/276p168) and again there is some evidence of correspondence. His entry is crossed out and then re-entered with entitlement to the ‘South Africa 1901’ clasp no reference is made to his previous service or the issue of the clasp, which is not on the medal. There is a large asterisk against his name which is unexplained.

Not only did George’s family secure a campaign medal but they also got his name entered on the corp's war memorial with the rank he did not hold when he “won” his medal. Perhaps securing these recognitions was justice for the family regarding George’s troubles with the RMLI and RGA.

George’s two brothers were Andrew Henry (older) and Willam Vere Brandram (younger) who were both commissioned into the RGA. Andrew served in South Africa on the Western Front and also in WW1 as a Lt-Col. William did not see in any campaign service and emigrated to Canada, he enlisted in the CEF in 1916 for overseas service. I don’t know if he actually served abroad.

In the Spink April 2016 sale a number of Webb family medals were sold dating from the Peninsula to WWII. All the groups have research apart from the QSA and miniature to Lt GT Wynne-Webb RGA which simply states he was the great great nephew of Sir John Webb whose medals are first in the Webb family lots. Andrew’s CMG, DSO group was amongst the Webb family medals sold at Spink.
Posted by meurig at 23:11