As the Boers advanced into Natal they destroyed railway bridges and culverts, one such bridge was that over the Thukela (Tugela) river at Colenso. 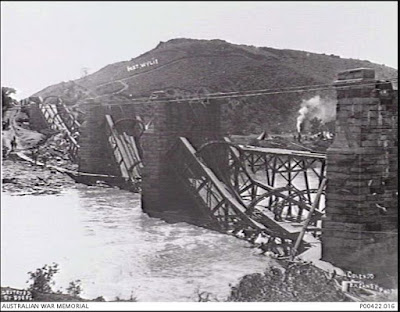 The besieged town and northern Natal was isolated from railway traffic. The Boers held the Thukela river line as a defensive position from December 1899 to February 1900. British forces under General Sir R Buller VC made three failed attempts before gaining a foothold across the river to the east of Colenso on February 21st, 1900. Ladysmith was relieved six days later on the 27th.

While the battles raged on the hills just north of the river work began to build a railway bridge over the Thukela. Ladymith had been besieged since 28th October 1899 and, after four months, the garrison and civilians were starving, food and medical supplies would be needed immediately the siege was lifted. The river was within range of Boer artillery, yet civilians form the Natal government's Public Work Department, were bought in to do the work instead of using Royal Engineers. As it was the Engineers had built two pontoon bridges across the Thukela here under fire. 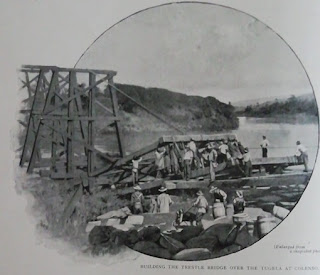 Work was begun on February 24th by one sub-overseer and 17 “mechanics”, their names are recorded on the medal rolls (WO100/279p238).  Supplies for the bridge were sent from Durban and work was expected to be completed in fourteen days. The bridge was was 600ft long and 30 ft high. In the end the bridge was completed in 20 days, a searchlight was lent by the Royal Engineers (who used some civilians themselves to operate the light) to allow work to continue at night. On two occasions the Boers shelled the bridge, no casualties or significant damage was recorded.


The first train to cross the bridge on March 19th was the Princess Christian ambulance train. 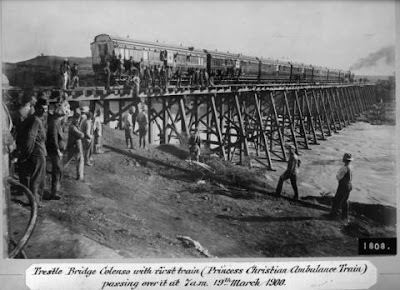 Each man who worked on the construction of the bridge was sent a congratulatory letter, the transcript reads:

Re-Construction of the Tugela Bridge

As you were employed on the re-construction of the Tugela Bridge, I have much pleasure in informing you that in an open letter, COLONEL RAWSON, R.E. was good enough to make the following satisfactory remarks:
“The Bridge was finished in good time to allow the waggons proceeding to Ladysmith to supply the wants of the town as it was relieved, and it was with much pleasure that I conveyed to Mr Rennie and the men working with him, the commendation of the Commander in Chief, Sir REDVERS BULLER on their excellent work.”
I need hardly say That I add my own acknowledgement of your good work, especially having regard to the fact that for some two days you were under shell fire.

To: Mr A Campbell"

Plans to re-build the bridge, and others destroyed by the Boers, were well advanced. British newspapers reported on the plans. The original railway bridge had been constructed in 1877 by the Patent Shaft and Axletree Company located in Wednesbury, a suburb of Birmingham. This company had also built the railway bridge at Frere which the Boers destroyed as well. They were awarded the contract to build a new bridge, an American company also tendered for the contract offering to build the bridge quicker, but the Government decided to stick with the original builders. The Shrewsbury Chronicle reported on the 19th January that the first span had been completed and inspected and was planned for despatch to Durban in the week. All the spans, five for Colenso and two for Frere were anticipated to be completed in six weeks. The spans would be a total of 735 feet in length and weigh about 740 tons.

Note on Sources
All the men involved in building the trestle bridge can be found on The Register.

Image of the destroyed bridge is in the public domain.
Image of the trestle bridge under construction is from With the Flag to Pretoria p458
Image of the Princess Christian ambulance train crossing is from the Digital Railway Images of South Africa

An actual copy of the letter sent to the building crew can be seen on this thread.