A "new" tribute medal has appeared on eBay. The medal is not in Hibbard's Boer War Tribute Medals: The Definitive Work (Constantia Classics (1982)). 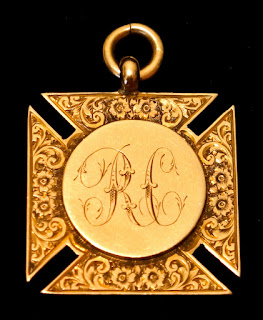 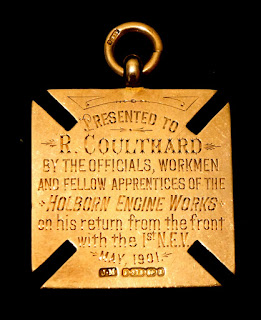 The tribute was presented to Ralph Charles P Coulthard who served as Sapper 5861 1st Newcastle Volunteers RE attached to 12 Field Company. He was awarded a QSA with J,DH,Bf,CC,OFS,SA01 clasps, I have not noted the medal for sale. His service papers are catalogued on FindmyPast under number 5858.

Ralph Coulthard was born in St Andrew's, Newcastle in 1880 (or 1882 according to census information), the son of James and Sarah Coulthard. He enlisted for Short Service, one year, to serve in South Africa on January 19th, 1900. He was serving in the Newcastle Volunteers RE.
Ralph was working as a fitter apprenticed to G Gray (or Grey), Holborn Engine Works for five years. Holborn Engine Works made ships engines.

There were 52 men from the Newcastle Volunteers who went out in March 1900 to serve with the 12th Field company RE. They served until May 1901, in that time they served in the Cape Colony, Orange Free State and the Transvaal.