The Caroline brothers from Derbyshire

John and Tom Caroline of the 1st bn Derbyshire Rgt (The Sherwood Foresters) both served during the war. They were half-brothers, the sons of Jane Caroline who married in 1877 and is named on their service papers as next-of-kin “Mother Jane Heptinstall, 48 Pitt Street, Eckington, Derbyshire”. The census and family trees available on-line are confused, the clincher are the baptismal records which in both cases name Jane Caroline as an unwed mother. The boys lived with different branches of the family at various times. 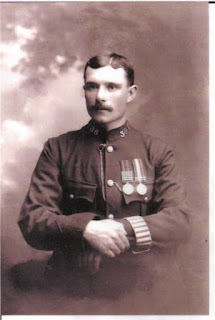 John was born in 1874 in Mosbro, Eckington and Tom (shown left) was born in 3rd February, 1877 in Rotherham, south Yorkshire. They enlisted within a week of each other in August, 1894 at Chesterfield, Derbyshire. John was 20 and Tom 17 (he claimed to be 18 on enlistment), they were both colliers. John was given number 4773 and Tom 4793. They were both posted to the 1st battalion in Dublin. John was posted the 2nd battalion in 1895 and went off to India and served on the North-West Frontier in the Tirah and Punjab Frontier campaigns of 1897-98. In October 1899 the 1st battalion was stationed in Malta, they received orders to embark for South Africa which were cancelled but then re-instated on October 31st. In the meantime the 2nd battalion had arrived from Aden and were in quarantine. On the 10th November John was posted to the 1st battalion joining his brother. The 1st battalion sailed from Malta on the 21st November.

In South Africa they would part company. Tom was selected to act as servant to Major-General Sir HL Smith-Dorrien, an officer of the regiment, now commanding the 19th Infantry Brigade (later promoted to command the 8th Division). Tom was with Smith-Dorrien throughout the campaign, serving at Paardeberg, Driefontein and Johannesburg.

The 1st bn had a fairly quiet war serving at Johannesburg and Diamond Hill. All would change in 1901 when they went on column in search of the Boers. Two companies of the regiment were part of Colonel T Dixon’s column when on 29th May they were attacked. The Boers set the veldt on fire and used the smokescreen to capture two guns, a bayonet charge by the Derbyshires and Kings Own Scottish Borderers recovered the guns but at a high cost, the Derbyshires lost 19 killed and 59 wounded. John was amongst the wounded, recorded as severely, fortunately he was able to return to duty.

Four months later the same column, now commanded by Colonel RG Kekewich (the defender of Kimberley), was in camp at Moedwil, western Transvaal. On the morning of 30th September they were attacked by about 1,000 Boers. The fighting was very severe, outlying picquets were quickly overwhelmed. Of one picquet of 12 men from the Derbyshires eight were killed and four wounded. Six men from the nine gun Maxim gun team were hit, one of the unwounded, Private W Bees, ran the gauntlet of Boer fire to get water for the wounded. He was awarded the Victoria Cross for his gallantry. Col Kekewich was wounded and command fell to the Derbyshire’s commander Col HC Wylly. After about two hours of intense fighting the Boers retired. The Derbyshires’ lost 17 killed and 44 wounded. Amongst the wounded the regimental history records “Pte 4793 T Caroline”, he is not listed in the Official Casualty rolls. Tom, though, was apparently elsewhere as Major-General Smith-Dorrien’s servant. Tom’s service papers do not record his wound. However, on John’s service papers he is recorded as wounded at Moedwil, so he was wounded for a second time in the war. John was invalided to England on the 8th October, 1901. He recovered quickly and was back in South Africa in early May 1902.

In September 1902 both were transferred to the Reserve to complete their 12 year enlistment. Tom stayed in South Africa, he took his transfer in the Marico district of the western Transvaal. John returned home to England in April 1902.

According to the Ancestry Family Tree Tom became a policeman in Bulwayo, Rhodesia. He married an English born lady in southern Africa before they returned to the UK in 1904. On the 1911 census he is a “colliery deputy (below ground)” living at Killamarsh, Derbyshire with a wife and adopted son. They went on to have four children, including a son called Horace Lockwood Smith Dorrien after his boss in the war. Tom died in 1949.

The splendid picture of Tom is reproduced here courtesy of Cyril Michael Knight.