Re-Named Medals - What do they look like? A Beginner's Guide

The QSA and KSA was always issued named, there are a variety of styles that are either engraved or impressed.
There is no susbstitute to reading, researching and looking at as many QSAs & KSAs as you can - obviously a medal in the hand is of more value than a sketchy image on the internet or in a book - but needs must these days!

Fortunately, unlike other campaign medals such as Waterloo and Crimea medals QSAs and KSAs have not been targetted by fraudsters naming up medals to deliberately deceive. However, you come across copies of the medals themselves - usually poor quality and easily spotted when compared to a genuine medal - eBay is full of poor quality copies, have a browse!
Of more concern are genuine medals that have been re-named, most of these are easily spotted because in order to rename the medal the existing naming needs to be erased. The act of erasing, known as "skimming", always removes part of the medal thus impacting the overall diameter and the width of the rim is not consistent. 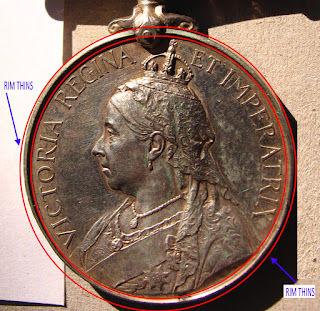 In general the details put onto the rim were consistent:

There can be variation in the Unit; battalion number, volunteer battalion or volunteer service company, the suffix "MI" for mounted infantry.

Civilians & Nurses: Rank (not for all), Initials, Surname

You will see variations to the above, generally this is ok, if the medal has not been re-named. Identifying a re-named medal is better than relying on the syntax of the rim details.

This image shows the naming on the rim from the medal above. This style of naming is common on re-named medals and never seen on officially named medals. You can see the metal in each letter is very rough, hence the name "chisel engraved".

Engraved Naming - found on medals to Army officers (but not all colonial units), some medals engraved on the QSA to other ranks in the RE, ASC and a few cavalry and infantry regiments.

QSA engraved to a sapper of the Royal Engineers.


Impressed Naming - most common naming, in a variety of sizes on both QSA & KSA. Medals named during and after WW1 have naming similar to the British War Medal - thin mid-size capitals.

Official Renaming - the Mint recycled medals and these are known as "official re-names". There will be signs of skimming, but usually less severe than in the first example shown above. The new naming will be in the correct style and you may see traces of the first naming applied.

Most of the naming was done in the UK, some slver and bronze medals were named in India. Another set of medals to Australian and New Zealand troops were named in those countries, these are medals presented by the future King Edard VII on his world tour in 1901 aboard HMS Ophir, you can read more here.

If you would like to contribute images of re-named QSAs & KSAs and genuine naming styles nto shown above please contact me.
Posted by meurig at 16:52